Established in Sheffield in 1866, Thomas A. Ashton Ltd, trading as The Ashton Group, is a dynamic group of three companies based at Cortonwood in South Yorkshire.

are a leading UK supplier of O-Rings, Bonded Seals, Gaskets, Fasteners, and other associated engineering products. We operate from a modern, purpose built 31,500 square feet centre in Barnsley, South Yorkshire and are ideally placed to distribute throughout the world. Ashton Seals are the preferred partner to companies in over 30 countries.

specialise in the design and manufacture of high quality, point of sale packaging and bespoke promotion, presentation and stationery products. Examples of our work can be found in retail outlets, offices and classrooms throughout the world and our main manufacturing processes include High Frequency Welding and Vacuum forming.

suppliers of Corporate Uniforms, including Polo Shirts, Executive Shirts & Blouses, Overalls, Trousers & Hi-Visibility Wear. Ashton Corporate Clothing supply corporate uniforms to a range of business environments and to companies with as few as 5 and as many as 5,000 employees.

Welcome to the Ashton Story. Within this section of The Ashton Group website, you can see the progress of Thomas A. Ashton Ltd from 1866 through to the present day.

We hope you enjoy following the journey. 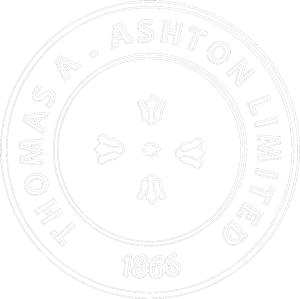 In 1866 Thomas A. Ashton trundled his handcart through the cobbled streets of Sheffield and district delivering wares, mainly paraffin.

As he plied his rounds supplying his customers, he noticed that the booming industrial revolution was suffering a great hunger. Sheffield industry needed pulleys, shaftings and other equipment in the power transmission field, but the only suppliers were usually in London. A long wait was inevitable if some machinery broke down and parts were needed quickly for repairs.

So, with very limited capacity and a lot of trust from his customers, an astute Thomas Ashton took a lease on premises in Norfolk Street and began stockpiling for the needs of Sheffield industry and where he couldn’t stockpile, he began manufacturing and ended up with a highly diversified family company that was to become well known as Thomas A. Ashton of Sheffield.

As Ashton’s customers increased in number he began buying up more premises in Norfolk Street and eventually found himself having to look elsewhere and in 1875, just nine years after acquiring the first lease in Norfolk Street, Ashton purchased premises in Sidney Street and built the Speedwell works. It became the centre for the company’s manufacturing of leather driving belts and power transmission equipment.

Norfolk Street played its role by having stores of other manufacturers’ equipment ready to be distributed to steel mills, engineering works and forges in the city when the need arose.

By the turn of the century, 1902 to be exact, Ashtons was riding on the crest of the now maturing industrial boom and Thomas Ashton accumulated sufficient capital to renovate most of his premises in Norfolk Street.

The company was fast becoming a household name in Sheffield and the redevelopment in Norfolk Street was the result of expanding local industry and the subsequent need for more stocks to keep it running smoothly.

The Sidney Street works was also keeping pace with the growing industry in Sheffield at the time and was manufacturing mill bearings and driving belts for the re-equipment of mills. While Ashtons did not hold a monopoly on supplying local industry, they were completely on their own until others gradually began catching on to the lucrative approach to business.

The Sidney Street works took on more importance in 1903, when an engineering department was added for the manufacture of shafting, bearings, tube fittings, plumber blocks and precision matching done to the customer’s specifications.

About the same time, the leather department which was producing flat leather belting for driving and conveyor purposes, began making hydraulic leathers for pumps and syringes.

It led to the making of every conceivable type of moulded leather, such as pneumatic leathers for foot pumps and tyre gauges, along with hydraulic and mechanical leathers of many varied shapes and sizes.

With the advent of electricity generation, the company increased its scope still further. They had their own generating plant and were appointed distributors for Frigidaire when domestic refrigeration caught on.

At the same time cars were beginning to enter into the way of life of many people. Ashtons could not resist making inroads into the industry and began producing washers and gaskets cut from leather and other materials.

Along came the first world war and Ashtons carved their own niche in history by making many thousands of bayonet scabbards and other leather military accoutrements such as straps, belts and pouches. These were moulded from leather and the experience gained was used in establishing a new peaceful line when the war ended.

They began making the well-known “Ashtona” attaché cases, which are still widely used because of their stout construction, although today air travel has diminished the demand of the heavier, solid cases.

More wartime experience in this instance, the press cutting of leather, led Ashtons to become one of the first in the field producing cut-leather soles for the shoe repairing trade.

In the 1920s broadcasting made its appearance on the entertainment scene and Ashton’s linked up with such names as Pye, Murphy, Ekco, Philips and Cossor in pioneering cats whiskers crystal wireless sets.

The next decade meant an interesting new facet to the company, as a humane electrical sheep and pig stunner was developed in the electrical department.

In 1940 the Sidney Street works was severely damaged in the blitz with the top storey being completely destroyed by fire and the leather department was moved to Norfolk Street.

After the war, in 1948 the leather department moved back into the rebuilt works in Sidney Street.

A section of the leather department had been producing sheaths for Bowie knives as well as small leather sheaths for the Dinkie fruit knife. This section was further expanded to produce all types of fancy leather cases, wallets and sheaths to hold the products of Sheffield’s small tool and cutlery manufacturers. These sheaths protected scissors, penknives, manicure fittings and rules.

This move prompted a further development, the production of many types of attractive leather articles to meet the needs of the advertising gift trade.

In the mid-1950s, Ashtons commenced work with plastic materials and successfully carried out experiments in moulding both pump cups and syringe cups. These were made of PVC and polythene which could withstand powerful insecticides, and so the patented ‘Ashtic’ plastic cup was born.

Expensive high-frequency PVC welding equipment was installed and production began on the manufacture of plastic wallets and cases for twist drills, chisels and screwdrivers. This meant the tool manufacturers could present their products in attractive and inexpensive cases for the customer.

Because of their reputation in the field of hydraulics, Ashtons gained a valuable agency in 1961 by becoming sole distributors in the area for Dowty Seals Ltd, handling their many lines including O-Rings, Bonded Seals, U-Rings, Wiper Seals and other precision rubber mouldings.

In 1963 Sheffield Corporation made a compulsory purchase order against the Norfolk Street premises for a road-widening scheme. New accommodation had to be found and there was plenty of room for expansion in Sidney Street for the housing of the mill furnishing department’s stocks.

In the same year Mr W. R. Wills, a great grandson of the founder Thomas A Ashton, became Chairman and Managing Director of the company and a new era in the development of the firm began.

By 1966 Ashtons were one of the largest stockists of hydraulic seals in the country, carrying millions of seals in many ranges. This trend continued throughout the 1970s and 1980s as the demand for Ashtons reliability and quality continued to grow.

Throughout this same period Ashtons was considered a market leader in the design and manufacture of flexible PVC packaging and so, in January 1996, Ashton Seals and Ashtons (Sheffield) were launched, evolving out of Thomas A Ashton Limited.

In 1999 Ashton Seals relocated from Sheffield to a modern purpose-built site at Cortonwood Business Park in the Dearne Valley. This strategically situated sales and distribution centre enabled expansion of the Ashton Seals operation and in 2003 Ashton Seals purchased the gasket cutting company Clough (Croydon) Limited. Specialising in the production of high quality gaskets and sheet jointing and complementing the existing Ashton Seals’ portfolio the acquisition also reintroduced in house gasket manufacture to Ashtons nearly 100 years after the company had first commenced cutting gaskets.

The continued growth of Ashton Seals prompted the decision to move Ashtons (Sheffield) Ltd in January 2005 to share the extended facility at Cortonwood.

This represented a significant investment for the Group, with modifications made to the building and the construction of a mezzanine floor to enable the two businesses to operate independently alongside the most recent addition to the Group Ashton Corporate Clothing.

Undoubtedly the Ashton Group has come a long way since Thomas A. Ashton made his first steps around the streets of Sheffield in 1866 and in 2016 we were delighted to celebrate the 150th anniversary since the foundation of the company.

Increasingly we find that once a customer becomes associated with one of our companies they then become a customer of another company in the Ashton Group as we continue to feed the needs of industry.

Gasoline carburettor was invented by Daimler

Motor cycle was invented by Gottlieb Daimler and Wilhelm Maybach

Antibiotics were invented by Alexander Fleming

Aqua-Lung was invented by Jacques-Yves Cousteau and Emile Gagnan

Silicon chip: The first integrated circuit, or silicon chip, is produced by the US Jack Kilby & Robert Noyce

Camcorder was invented by Sony

Ashton Seals Ltd and Ashtons (Sheffield) Ltd both formed, evolving out of Thomas A. Ashton Ltd